Exercise 2: Objects in different positions in the frame

Project: Looking through the viewfinder

Exercise : Object in different positions in the frame

Aims of the exercise:-

I had a very kind offer from my husband (hereinafter known as JB) that he could stand amongst the heather on the Common, holding an umbrella with his back to me.  I appreciated that and thought I would hold it in reserve.  However, I don’t know why but I had a yearning to photograph a horse.  Horses are ridden across the Common at various points during the day but they don’t stand still and timings aren’t exact.  I have seen other horses in various fields round and about but usually in a far distance or not where I could park easily.  Then I remembered that there are some horses near a public footpath which is close to the Wey canal.  I also thought that I should be able to achieve some of the other exercises around there as well.

It was a cold but dry day and I set off to Pyrford which is not too far away from where I live.  I parked in the car park of a popular pub by the river and walked down the canal until I came to the bridge which leads over to fields and houses in private roads, but where there is a public footpath.  Thankfully there were horses in one of the fields and I found one standing alone which I thought would be suitable.   It wasn’t as close as I would have liked but I went ahead and, in fact, took quite a lot of photographs in groups of four.

Here are the four which I have chosen, in the order I took them:-

Horse 1 (middle of frame) Horse 2 (near the top of the frame, – NB the fence got slightly in the way here) 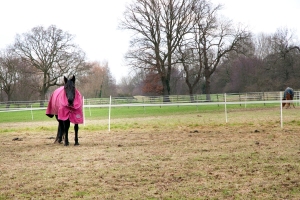 I realise, looking at the prints again now, that , although the horse is in a field, it isn’t exactly a large clear background because there are trees which form a backdrop.  However, I don’t think they really detract from the ambience of the scene.

Whichever way I look at the different prints, the horse still looks rather sad and lonely, standing there in its pink coat and gazing at me.  It was probably wondering what on earth I was doing but didn’t have the curiosity to stroll over and have a closer look!  One of its colleagues in an adjacent field did actually come towards me, but, as it was even further away, I concentrated on the first horse.

Michael Freeman states that a position in the centre, “…is so stable as to have no dynamic tension at all”, and that it tends to appear more in context if it is slightly away from the middle. (2007, p. 24).  I agree here about dynamic tension but, whichever part of the frame , this horse is still within its context – in a field, wearing a pink coat on a very cold day.  If it had been facing left, say, and placed at the right hand side and had been travelling along (and if I had used a slow shutter speed to slightly blur the movement) then this would have introduced a sense of movement.

As it stands, I prefer the first image where the horse is in the centre of the frame and looking straight at me.  To me this gives more a sense of connection between the two of us – each of us looking at the other.