The purpose of this exercise was to see what effect is gained by changing lenses from one focal length to another as opposed to physically moving further away or nearer to the subject.

I took this series of  shots on a morning out by the Wey Canal in Pyrford near Woking  which is not too far away from where I live. For this particular exercise I decided to use John Donne’s summer house as a subject.

John Donne (1572-1631) was one of the metaphysical poets of the period and a favourite of mine.  He had a colourful early life, including marrying the 16 year old Ann More in 1601 against the wishes of her father, George More, Lieutenant of the Tower of London. This earned him a short stay in Fleet Prison.  Subsequently he accepted a quiet life in Pyrford, Surrey and lived at Pyrford Place which belonged to his wife’s cousin Sir Francis Wolly.  The large house there was demolished several years and  a small up-market apartment block has replaced it.  However, the Summer House still remains.  It is on private land but can be seen from the opposite side of the Wey Canal.

It was a very cold day with a pale overcast sky which made exposure more tricky.  I did some adjusting in Photoshop to remedy this and enhance the  toning.

Looking across the canal.  You can see that the house itself is quite small and very close to the water. There are the remains of an old wall to the side of it.

Not much difference in view from 15mm

This is around a standard lens and gives almost a view corresponding to the human eye. 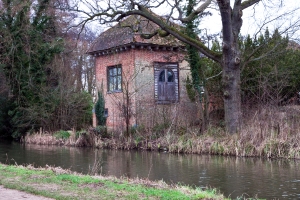 A more magnified view of the house, with little remaining of its context. 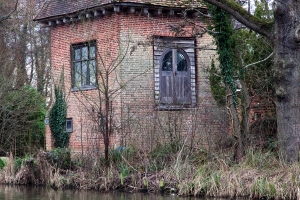 The house alone with its details in sharper focus.  There is no context and so it could be almost anywhere where there is some water. I can also see more detail of the door-like window on the side of the house which looks out of place somehow.

This showed me the wide difference which can result between focal lengths.  Choice of length will depend upon the intent of the shot and whether one wishes to show a subject in its wider context or  more detail.  I also note that, as Freeman points out (p. 55 2007) the wider angle lens used in the first photograph gives a more diagonal convergent image than the longer lens used in the fifth photograph.