which cheered me up and gave me some energy to work on part 2, even after looking at my own photographs and comparing them with the ones in the books I mentioned last time.  Still, this isn’t about my perceived inadequacies, it’s about my learning!

There have been several times in the past year when I’ve set off to photograph an event.  One of these was a ‘Street Party’ to celebrate Prince William getting married. It wasn’t really my cup of tea but it was put to us as, “The weather should be nice; you’ll get free sandwiches and cakes; a glass of wine, and there’ll be some photograph opportunities as well.” Sold!

I took many photographs and emailed an edited selection to our friend in case any of her neighbours might like some of them. I’ve looked through them again now and composed a  small contact sheet of the types of things I wanted to show. 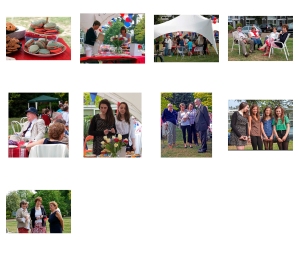 The food that had been prepared; people young and older; choosing food and enjoying it and the day. The Mayor visited (he was doing a round of street parties of the day) and posed for several pictures – one of them being with the youngest and oldest residents.

I then thought about how I would put them together and sizes.

Arranging, preparing –   then choosing the food.

Relaxing and enjoying the event.  I made the one of the Mayor largest, thinking this could be the type of image a newspaper might show as a leader – “Mayor visits Street Party and meets the residents”.

final two, coming to the end of the afternoon and contrasting ages.

This was the first time I’d done something like this and so I felt slightly uncomfortable, although this lessened as time went on. One thing I had done was to set the camera on aperture priority at f11 which I thought would be a reasonable one for sharpness at varying distances.  It enabled me to just take photographs but would have been better if I had checked the kind of exposures I was getting. One of the residents did post some of her own photographs to a local website and I noticed that there were a lot showing the food.  That’s understandable though because a lot of time and effort had been spent to cook, prepare and present the food very attractively.

In an earlier post I wrote that I had considered Geocaching as an Assignment subject but decided against it after discussing with my tutor.  There was the issue of doing something entirely new, whilst attempting to take good photographs plus the weather being rather cold for spending too long outdoors .  Oddly enough, a couple of days after that post, I woke up thinking, “Maybe there are some geocaches on the Common”.  I don’t understand why I hadn’t thought of that before and it just shows what anxiety laded tunnel-vision can do to you!

I did a search on the geocaching.com website and discovered that there are several caches near to me (quite a few seem to be near pubs).  My daughter was coming over with the two boys and dog for a walk so I decided it would be an ideal opportunity to have a go. I chose the one nearest and got the co-ordinates into my iphone.  Looking back I should have let Doug (oldest grandson) do it  but I was too carried away to think of that at the time. Anyway, I let him hold my (precious) phone when we got onto the Common.

My tutor was right of course about the difficulties of taking photographs when you’re an active participant but as Doug was in charge of the phone I made him the star of the show. This did give me some opportunity to take photographs but in a casual way.

Screenshot from computer, co-ordinates on my phone (although I’ve masked them so as not to give the location away) and entry onto the Common.   I thought they went together as a group but maybe the one of entry to the Common should be larger and stand alone. 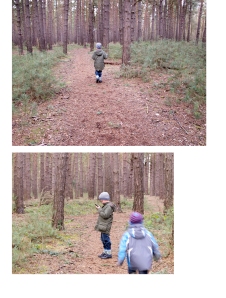 There’s Doug striding ahead and then checking co-ordinates, closely followed by Ollie. Talking to another walker about what we were doing and then another check on co-ordinates.

It’s just around the corner – it is near that branch?  Doug found it all on his own!  (I’m not going to give the location away of course!).

I’m not satisfied about the final one. I got the perspective wrong and it’s too close for the camera really (G12 not my larger one).  I didn’t do much processing on these images either. I hope I was conveying some of the sense of adventure through the selection I chose though.

Both these events were planned in advance, although I suppose ‘planned’ is rather a loose word because there wasn’t a large amount involved. It was an advantage that I already knew the locations. The two harder parts were taking photographs of strangers (the first set) and taking photos of my family (the second set) – the younger ones are quite amenable but the older ones are not keen, so hence not many of my daughter.

Choosing the selection wasn’t easy – did I go for the most technically perfect; the most interesting to me or the ones which would fit the theme. Along those lines I had some thoughts for projects.  One would be to lay out all the images taken and then ask participants to choose their best 10 – the ones which they felt conveyed the most of their own experience. Another would be to go somewhere new with Doug , give him  my older compact and see what he finds the most visually interesting – compared with my own choices.

I’ve now learned how to do contact sheets in Bridge although it’s a pain that they’re in pdf form which you then have to change to jpeg. WordPress just won’t seem to accept pdf even though it says they do. So far as having images in different sized and placements I kept this simple at this point by opening a Word document which I saved as pdf then turned into a jpeg.  I’m learning how to use InDesign but it’s early stages yet (more on that subsequently).