The Art of Photography

Feedback and changes to Assignment 1: Contrasts

I was pleased that the specific feedback was generally positive in terms of images produced;  how they met the brief; print quality/layout and also my blog.

Some suggestions for improvement were made though:-

“You’ve taken a lot of trouble with this image but as you say, it was difficult to get the angles you needed.  This might have been a case of going for a different, simpler more abstract image.  You had one on your blog!” 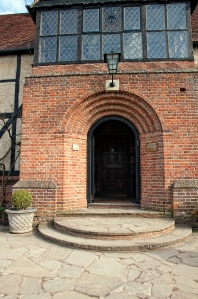 It is rounded of course and it was taken after I had submitted Assignment   1.

This is the top of the arch

I decided that I still wanted to have something even rounder which would, somehow, represent a contrast to the hard diagonals of the Gherkin.  There are two possibilities so far:- 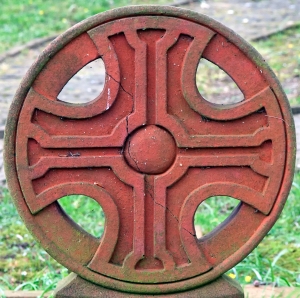 A terracotta, celtic  cross surmounted a gravestone in Watts cemetery which is a small peaceful place  in Compton, Surrey . 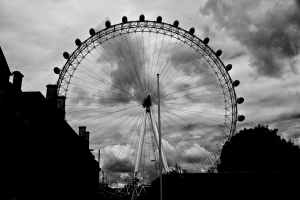 The London Eye which is not only round but very large.

“…it’s a very interesting image which communicates powerfully.  Very well observed”.  However, the suggestion was made that the  image might have worked even better framed more  tightly and, of course, it’s much better to do this in camera rather than cropping afterwards.

I did further cropping to this:- 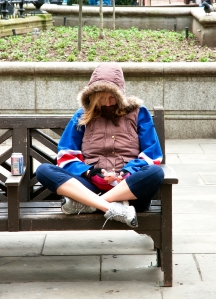 Obviously I could have cropped to just the girl but I still wanted to see some kind of context for her.

It was pointed out that I had “fallen into the trap of assuming that the viewer will associate that the people walking are ‘moving’, when in fact the camera has frozen their movement”.  I’ve had another go at this and the lady with the pram actually stood still whilst I took the picture.

Thought to work quite well but including other distracting elements in the frame. My tutor thought that another image in one of my blog posts (of an air balloon in Egypt) communicated both large and small.  I’m still thinking around this one and keeping it in mind when I’m out photographing but haven’t found what I think is a good one as yet.  The London Eye is certainly large but it isn’t contrasted against anything small.

My tutor suggested that I have a look at the work of Lee Friedlander and the way in which he fragments the world in his photography through various means. She linked this with a comment I’d made on my blog in quoting from an article by Dziga Vertov, a Soviet film director.  Vertov compares the effect of perspective in drawings and paintings (which proposed that the spectator was the unique centre of the world) against that of the camera, particularly the movie camera, which ‘demonstrated that there was no centre’. Do I feel that Friedlander’s work might  fit this theory? This is a difficult one because  I think that Friedlander’s work is so very different.  The feeling I get when viewing his images is of being alongside him, looking from inside out.  His perceived world, as seen through his camera, is right in front of my eyes. I don’t just see straight ahead. It’s as if I’m turning my head to take in a multiplicity of viewpoints. I think he’s got quite stuck in my head because, recently, I was experimenting with b+w conversion and posted this on my Flickr stream.

Some comments likened this to a British version of Friedlander’s ‘America by car”. A pale imitation, but I’m realising that I do feel drawn towards juxtaposed images, reflections and frames within frames and this is slowly creeping into my photography.

I am going to go with the Celtic cross which contrasts in many ways with the Gherkin. Both are ‘man-made’ but the one is by hand and the other by both men and machine.

I will leave this as it stands.  Tighter framing is still something that I’m working on.

I’m not happy with  the one above as there isn’t enough stillness there.  Wondered if this might be a better one:-

You can see by the blur that the people in the chairs are definitely moving whilst other people are standing there.

I still haven’t really come across a situation with such a juxtaposition which really appeals to me. It was this type of scene I was thinking of

This shows the immensity of the lower facade and entrance to La Sagrada Familia, Gaudi’s famous basilica in Barcelona. This is an old photograph from a compact camera so I wouldn’t submit this, but it gives an idea of what I’ve been looking for.